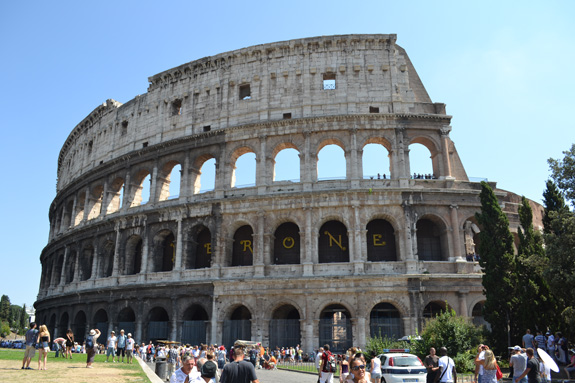 If you have a limited amount of time, you can see the main highlights of Rome in three days.  This will give you a good introduction to the city.  Here are my picks for things to do in Rome.

Most American flights arrive in the morning to Leonardo Da Vinci Airport in Rome.  Catch a ride to your hotel, eat a light lunch, and take a nap.  In the late afternoon, wander the narrow backstreets of old Rome in the area by the Campo de’ Fiori.  Stop for excellent traditional thin crust pizza at the tiny Pizzeria da Bafetto (on the corner of Via Sora at Vial del Governo Vecchio 114). Take a leisurely stroll around the Piazza Navona, Rome’s most interesting night scene.  Check out the art for sale by local artists.

Next, walk over to the 1,900 year old Pantheon.  At night the inside is closed, but the view of the building lit up in the dark is mesmerizing.   Stop for a chocolate hazelnut gelato in one of the many gelaterias near the square.  Keep walking these streets if you aren’t tired; else go to bed.  It will be a busy day tomorrow.

In the morning put on your comfortable walking shoes and take the metro or a taxi to the Colosseum.  Originally called the Flavian Ampitheater and built in 80 AD, the stadium was an arena for spectator sports in Roman times.  It’s an impressive structure.  Afterwards grab a sandwich and a drink from a food stand. Next door is the Roman Forum and Palatine Hill.   The Forum is ancient Rome’s birthplace and civic center between the seven hills of Rome.  Today it is mostly ruins, but it is easy to image what happened here so many centuries ago.  Stand in the spot where Julius Caesar was murdered!  The Palatine Hill is where the Emperor’s palaces were.

After seeing those sights, you will be ready for a snack and a rest.

Next, walk most of the length of the Via del Corso, the main shopping street of Rome. Look for leather jackets, handbags, and briefcases, or whatever fashions catch your eye. Take a right at Via Condotti to the Spanish Steps.  Climb the steps for a view of the surrounding area.

By this time, your feet will probably hurt.  Maybe instead of walking, you can ride a Vespa.  But watch out for the crazy Roman traffic!

Sit outside to eat dinner at a café in one of the side streets near the Trevi Fountain.  After dinner, sit by the fountain to see the sculptures and watch the people of the world walk by.  Try to guess which country they are from.

This morning go to the Vatican City.  Sign up ahead of time on the Vatican’s website for a guided tour of the Vatican Museum in English. You’ll be able to avoid the long ticket line, but not the crowds you will encounter inside.  The Museum tour includes a few minutes in the Sistine Chapel, and concludes with a tour of St. Peter’s Basilica.  The end of the tour deposits you in St. Peter’s Square.

If you still have the energy for more walking, take a taxi to the Villa Borghese Gardens.  It is a large park perfect for strolling or napping on the grass in the shade of a large tree.  When you are refreshed, if you are an art lover, visit the Borghese Gallery.  Next, walk down the Via Veneto, through the old Roman wall.  If you have been traveling for a while, you may be tired of the pasta and pizza menus and crave some American food. In that case, go to the Hard Rock Café on Via Veneto, just before the Piazza Bernini.