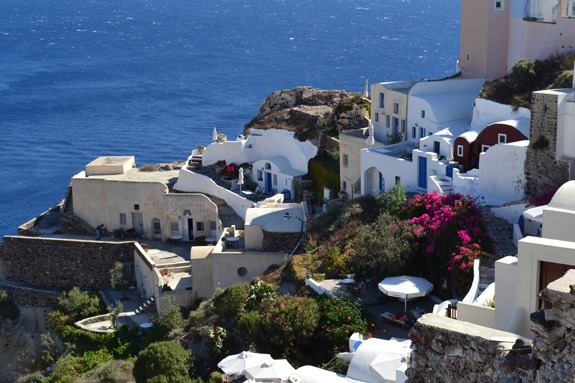 “Give me your ticket,” snarled the scruffy looking man.

“You need ticket here. You have cable car ticket.”

The ship was anchored off the coast of the Greek island of Santorini.  The curved shaped island was formed from remains of a volcano that erupted in 1,700 BC.  The bay is what is left of the caldera.  The island is hilly and rocky, with the main city of Fira perched on a high cliff above the Aegean Sea.

Since there was no dock, we took a small tender boat to shore.  The day was hot and windy and the boat heaved up and down like an amusement ride.  The tour bus wound back and forth along the narrow switchbacks until we reached the summit.  At the top we visited a winery specializing in Vin Santo dessert wines.  I didn’t care for the wine; I thought it tasted like cough syrup!

The bus careened along the spine of the island.  We could see the sea far below us on either side.  We stopped in a traditional fishing village called Oia, on the north end of the island.  The village is built into the cliff side.

Most of the buildings are several hundred years old.  Rich sea captains built the houses and had them painted with paint left over from painting their ships.  Thus, most houses are white, although a few are red, blue, or yellow.  The village had many nice shops.  We bought a print of the Oia seascape from an art gallery.  The elderly owner/painter, who didn’t speak much English, sold us the print from behind his ancient desk.  There was a painting on the wall of a much younger man.  I asked the painter if it was a self-portrait of him many years before.  His face broke into a big smile and he nodded vigorously.

After more touring of the island, we ended up back at Fira.  We sat in a café on a balcony overlooking the azure sea as the sun started to go down.  We had two choices to get back to sea level and the ship from our lofty perch – take a cable car or walk down 600 steps.  There was a big line for the cable car so we chose the steps.

He wouldn’t let us pass.  I started to get annoyed.

“Get out of my way or I’ll go find the police.”

He finally backed down and let us through.  He was a mule herder.  He wanted my cable car ticket to sell.  The mule herders ferried tourists from the small dock hundreds of feet below up the steps on the backs of mules for a fee.  Since we were walking down instead of riding the cable car, we didn’t need the tickets provided for us by the ship.

There were many mules milling about on the trail.  Some of them were tied up, and some weren’t.  At times packs of mules came running up the hill toward us.  We had to dodge them as they ran by, hugging the wall so as to not get stepped on or body-checked.  These mules were not as big as horses, but they still would pack a mighty wallop if they run into you.  After several close calls we made it down all of the steps to the dock for the boat ride back to the ship.

I have never run with the bulls at Pamplona, Spain, but I can now say I have safely run with the mules of Santorini!