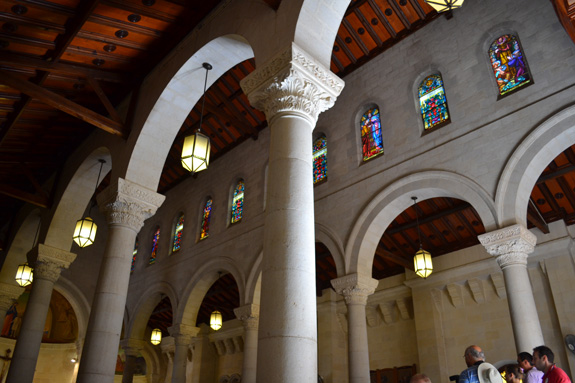 “I am smiling because I have positive energy!  We are going to have a good day!” said our new tour guide.

I had only been on the bus five minutes and already she was getting on my nerves.  She professed to be an expert on all three religions of the area, a leader in the Kabbalah movement (made semi-famous by Madonna and other celebrities), and had written three books on positive energy.

For the first 90 minutes of the bus ride through northern Israel from the port in Haifa, she chattered away about the amazing sights we were going to see and how great a tour guide she was but that she didn’t have an ego, while mentioning positive energy about ten times.

Our first stop was the Mount of Beatitudes.  This is a hill overlooking the northwestern part of the Sea of Galilee where Jesus delivered the Sermon on the Mount.  The Sea of Galilee isn’t really a sea, it’s a large lake.  I suppose thousands of years ago the local people hadn’t ventured as far as the Mediterranean Sea, so they called it a sea instead of a lake.  It is a nice looking lake, with hills on one side and the mountains of the Golan Heights on the other.

There is a Franciscan church on the site.  The landscape and grounds are meticulously manicured.  It is a beautiful site; however it is very hard to picture what it must have looked like in the time of Jesus.  Right now it looks like a country club in San Diego.

I soon realized that seeing an old church on the traditional site of something relating to the life of Jesus was the rule.  This rule must have been established sometime after Constantine declared Christianity to be the religion of the Byzantine Empire.  Of course, the experts are not necessarily sure that these sites are exactly the sites mentioned in the Bible.  But, they’re probably close enough for most people.  If they’re off by a few yards, who would know?  You can’t see much of anything existing from the time of Christ.

The corollary to the “church over the miracle site” rule requires that there must be a gift shop selling religious artifacts to the visiting faithful pilgrims.  The gift shop must be entered by the faithful pilgrims prior to exiting the holy site.  There must be no exit that bypassed the gift shop.  Gift shops accept all of the major currencies and credit cards.  On the plus side, the gift shops are air-conditioned and usually include the toilets (an important resource on long bus rides).

When we got back to the bus at the appointed time we had lost the tour guide.  When she finally arrived, several people complained that she was supposed to explain the sites to us and not disappear.  She apologized a dozen times and said that since she had positive energy she wouldn’t let it happen again.

We drove closer to the shore of the lake and stopped at a place called Tabgha.  I had never heard of this place and wasn’t sure what we were going to see there.  I soon found out that there was a church built on the spot where tradition holds that Jesus performed the miracle of the two fish and five loaves.  This church is fairly new, having been rebuilt recently by a German evangelical group.  Right in front of the altar in the church is an original floor mosaic from the Byzantine era marking the spot of the miracle.  The mosaic designer must not have gotten the correct design memo 1,700 years ago.  He got the number of fish right but only put four loaves in the basket!

Farther up the coast road is the site of the village of Capernaum.  This is the place where Jesus stayed with Peter and performed a miracle by healing Peter’s mother-in-law.  The original village was replaced by one in the Byzantine era, then destroyed at some later point in time and never rebuilt.  There are the ruins of a synagogue in the village and remnants of walls built from local stone. The village is quite small overall, and the rooms of houses are also very small.  Following the established rule, there was a church built over the site where it is believed that Peter’s house stood and the miracle occurred.

We drove most of the way around the Sea of Galilee and ended up at a place called Yardenit on the banks of the Jordan River.  This is near the place where John the Baptist baptized Jesus.  People come from all over the world to be baptized here. For this site, no one is claiming this to be the exact place of the baptism of Jesus because nobody knows, but it is close enough.  Maybe for that reason there is no church here, but there is a gift shop.

The Jordan River was smaller than I expected.  It also was home to a family of nutria who did the backstroke upstream, came on shore to clean their whiskers, and spooked unsuspecting pilgrims who stood in the water.  They can be nasty creatures when provoked.

We went to a kibbutz near Tiberias for lunch.  A kibbutz is a social commune where everything is co-owned by the members.  Despite this, they provided a decent buffet.  Since the idea of a kibbutz sounds like Communism to me, I expected a simple uninspired menu, but it was edible.  The guide explained that kibbutzim in Israel today are losing young people to the cities.  She was saying something about the lack of positive energy in today’s kibbutzim as I drifted off to sleep.

On the way to Nazareth we passed Cana, where Jesus performed his first miracle turning the water into wine.  A lot of the shops in Cana had signs that referred to this miracle, such as the “Water into Wine Falafal Shop” and the “Water into Wine Dry Cleaning” service.  Really, I don’t make this stuff up or embellish things.  This travel blog tells it like it is.  By the way, for a reason unknown to this author there is no church to visit in Cana, despite the first miracle having been performed there.

In Nazareth, we went to the spot where it is believed that Jesus lived as a child with Joseph and Mary.  There was a big Catholic church, called St. Mary’s Church, built over the ruins of a 1st century house.  Many countries of the world have donated large mosaics or other kinds of artwork depicting Mary and baby Jesus to this church.  They are shown on the walls inside and outside the church.  The crowd was too big for me to get to see the house ruins.

Next door is St. Joseph’s Church.  Joseph didn’t get as big a church as Mary and I don’t think it is built over anyone’s house ruins.  Still, it is a nice looking church.  While we were there a visiting African congregation was holding a service in the church.  The people were fancifully dressed in the traditional robes, singing and swaying to the music.

As we pulled back into the port at Haifa, the guide was sitting behind me explaining the difference between Christianity, Judaism, and Islam to a couple from New Jersey.  I think she was getting some of her facts wrong.  She still had her positive energy though.

Israel is still a dangerous place.  The day after we left Israel, terrorists attacked a bus and a car in southern Israel on the road from Be’er Sheva and Eilat (Eilat is a resort town on the Red Sea).  Seven people were killed and a couple of dozen people were wounded.