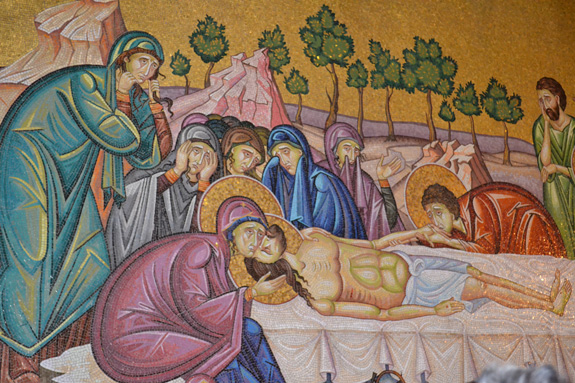 Riding the bus from the port of Ashdod, Israel, on the Mediterranean Sea inland and up into the hills to Jerusalem was like traveling back in time.  On the coast, the ship docked in a modern, busy, industrious port.  Giant cranes lifted and stacked containers five stories high.  Thousands of new cars sat in rows collecting dirt on their windshields before being cleaned and shipped to dealers.

The tour bus cruised down new highways in heavy traffic and then past the place where Abraham was to sacrifice Isaac 4,000 years ago.  Before the road climbed into the Judean Mountains, we saw the battlefield where David slew Goliath.

Despite this area being a desert, there were many fields planted with crops such as grapes, oranges, corn, and cotton.  It was land irrigated using reclaimed waste water.

There was a marked difference between lands of the people groups here.  The Israelis have built sophisticated irrigation systems and their land was generally green.  Social communes called kibbutzim were scattered across the desert, each like a green oasis.  The Palestinian areas were dry and dusty, and generally look poorer.  In some areas Bedouins lived not in tents but in shacks along the side of the highway.  One extended Bedouin family and their camels and goats lived in each grouping of shacks. The Bedouin areas were completely desolate.

The mountains used to be full of trees. The guide explained how the Turks of the Ottoman Empire had caused the destruction of all the trees in Israel during World War I by offering three gold pieces to anyone who brought a load of wood to the railroad stations.  The wood was used to make steam for the railway.  Since the creation of the new state of Israel in 1948, young Israelis have been planting trees.  The mountains are now full of trees again.

After a ride of 1 ½ hours, our first stop in Jerusalem was at the Garden of Gethsemane and the Church of All Nations.  The garden looks out over the old city of Jerusalem from the Mount of Olives. The church itself was not memorable to me, and I was surprised at how small the garden is today.  I don’t know if it was larger 2,000 years ago.  The garden has a dozen old olive trees with very gnarled trunks.

We passed through the Jaffa Gate to get inside the old city.  We saw the Tower of David, which is now the tower of a mosque, and walked to the square in front of the Western Wall.  The Western Wall (also called the Wailing Wall) is revered by the Jews as part of the foundation of the Temple Mount, the sole remnant of the Second Temple, which was built by Herod the Great and destroyed by the Romans in 70 A.D.  The area in front of the Western Wall is divided into two sections, one for men and one for women to get close to the wall.  Several hundred people were bobbing and praying at the wall and sticking written prayers in cracks of the wall.

The day was sunny and very hot.  I stood for quite a while in the square in the sun waiting for the tour to resume. I was sweating heavily through my clothes and I wondered how the many Orthodox Jews in their black clothes and hats dealt with the heat.

The Muslim Quarter of Jerusalem consists of many narrow lanes lined with shops of all kinds.  There streets were mostly deserted because of Ramadan.  The Muslims were fasting during the daylight hours and probably stayed at home.  We walked to several stops on the Via Dolorosa (also called the Way of Sorrows).  According to Roman Catholic tradition, this is the path that Jesus took through Jerusalem on his way to his crucifixion on Calvary Hill.

The Via Dolorosa ends at the Church of the Holy Sepulcher.  This church was built in the 12th century by the crusaders and today is shared by several Christian denominations.  According to tradition, this church was built on the site of Christ’s crucifixion, entombment, and resurrection.

The final stop of the tour was Bethlehem.  This city of 35,000 people is in an area controlled by the Palestinian Authority.  To get into Bethlehem we had to pass through a checkpoint through the border wall recently built by Israel.  The border wall is made of grey concrete panels about 20 feet high.  It is an ugly structure.  It was “decorated” on the inside by several colorful protest murals.  According to a sign I saw, Israeli citizens are not allowed in this area.  Since our tour guide was an Israeli, he left us on the Israeli side, and a Palestinian Christian became our new guide on the other side of the wall.

The new guide took us to the Church of the Nativity on a hill overlooking the desert valley.  This church was built in 530 A.D.  Everything in there definitely looked 1,500 years old!  We stood in a large upper room for almost an hour in the heat to get our turn to go down a narrow stone stairway to a small, dark lower room to see the birthplace of Jesus and the manger site.  The birthplace site was denoted by a large silver star on the floor.  I couldn’t get in to see the manger in a small adjoining room because of the crowd.

I had a look in the Catholic chapel where the Christmas Eve service is held every year and shown on TV.  Outside the Church of the Nativity is the Manger Square, which is also shown on TV.  The square is not very big and I could imagine how crowded it must get at Christmas time.

The tour was a long and exhausting, but fascinating look at ancient Jerusalem and Bethlehem.