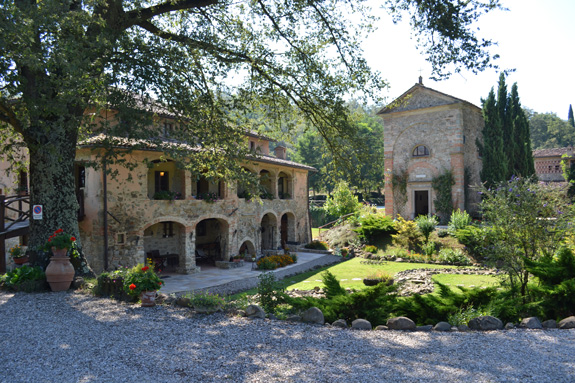 Calzolaro is a tiny village in the middle of Umbria.  As you drive through it, your eye catches the faded sign of the Rio Rosso café.  Old men play cards at an outside table while drinking their grappa.  Old peasant women shuffle along the sidewalk on the way back home from doing their shopping.  Boys are kicking a soccer ball around the field.

Welcome to rural Italian life in Umbria.  Where the pace of life is slow, the air is clean, and the hills are heavily forested.  Tuscany, Umbria’s neighbor to the east, gets more attention, but the small towns of Umbria are as tranquil as they come.

I found the bed and breakfast hotel called La Preghiera on the Internet.  I was looking for a place to hold a small destination wedding in Italy.  It looked very promising on its website, but you never can tell until you get there.  In my case, the villa was everything it was advertised to be and was the perfect place for the wedding.

The villa is owned by an elderly British/Uruguyan couple named John and Liliana Tunstill.  They bought the property approximately twenty years ago.  The buildings, consisting of a large house (formerly a monastery), smaller house, and chapel, had been built in the mid-19th century.  When they found the property, it was in ruins.  John, an architect, led a meticulous renovation project to transform the wreckage into a comfortable and modern, yet rustic Italian villa.

The house has nine bedrooms which can be reserved individually or as a group and a large veranda on which to sit when having breakfast or pre-dinner cocktails.  The view from the veranda is across the neighboring farm fields to the forested hills beyond. Currently the farmer next door has a tobacco crop planted.  I didn’t know they grew tobacco in Italy.  John explained that tobacco had been grown in the area for over a hundred years but was being phased out due to the health risks.  However, the farmers have hung on to tobacco as a cash crop because there is more profit in it as compared to other crops.

The small house is a self-contained vacation apartment with three bedrooms.  The property also has a large pool which is a welcome respite on hot, muggy August afternoons.

The unique feature of the property is the chapel.  Built in 1871, it is ideal for a small wedding with no more than 40 people.  In our case, there were only nine people (including the bride and groom), so we fit nicely in the first two rows of the chapel.

Despite being in the countryside, the villa is only a few hundred yards from the village of Calzolaro, and a mile or so from the small town of Trestina.  The town has the usual amenities, such as a bakery, a flower shop, small grocery stores, and a few restaurants.  We were there in August, when many locals take vacations, so the stores and restaurants were closed everyday from 1pm to 4pm.

In the evenings we ventured out to suggested local restaurants in the countryside for authentic Italian cuisine.  These restaurants were far from the poor quality and expensive tourist traps in Rome and Florence.  The food and service were good, the prices reasonable, and every dinner was a three hour affair.

Our time in rural Umbria was relaxing and pleasant.  If you are thinking of visiting Italy, I recommend getting away from the big cities and seeing how the locals live in the countryside.  Consider La Preghiera for your stay.