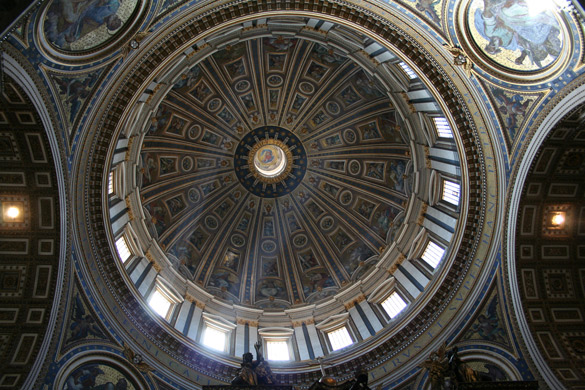 The line followed the contours of the buildings around one side of the great square.  Metal barriers four feet high ensured that people stayed in line.  It was late afternoon.  There was only an hour left to tour the Vatican Museum and see the Sistine Chapel.  I didn’t think we were going to make it.  The line was too long and moving too slowly.  At least we would get in to see St. Peter’s Basilica.

Long lines and crowds are a given if you visit Rome in the summer.  We were there in early September.  The peak crowds of August had dissipated but there were still large numbers of tourists in the city.  We had done fairly well at the Colisseum, only waiting about ten minutes.  It was a different story at the Vatican.

We passed through the gate at the start of the line.  There was no one there.  I got an excited feeling like I was at the amusement park and there was no line for the giant rollercoaster.  That meant I could race through the empty waiting lanes to the front of the non-line and jump on the rollercoaster right away.  And come back and do it again.

We walked through the empty lanes, zigzagging our way along the edges of buildings.  As we came around a corner we finally caught up to the real end of the line.

“Hey, I expected a much longer line.  We’ll be inside in no time.” I said confidently.  My family knows how much I hate waiting in line.

Tourists have evolved many line waiting strategies.  Some people tell jokes or stories to their companions.  Some read a guide book to learn about what they are about to see. Today, many people play games or watch videos on their smart phones.  We decided to watch the tourists around us and make up stories about who they were and where they were from.

There was a couple behind us.  They were clearly American college students.  They had the requisite backpacks and t-shirts with “Harvard” written across the front.  The guy had long curly hair, a scruffy beard, and baggy board shorts and flip-flops.  The girl had nice legs and exhibited them below tiny shorts from Victoria’s Secret with the work “Pink” across her butt.  The girl was chattering non-stop in a southern accent about Rome, the wine they had drunk, where they were going next, and how limoncello was such a great desert.

We didn’t have to guess where they were from or what their story was.  She was telling everyone within earshot.  We weren’t eavesdropping; that would be impolite.

The line was barely moving.  I couldn’t tell what was up ahead or what the hold-up was.  I tried to have a good time anyway.  I wasn’t stuck in a little grey cube staring at a computer screen.  I was enjoying a sunny afternoon in a beautiful city and about to see magnificent works of art.

The line inched forward.  The whole time we were subjected to the American girl’s monologue about her European vacation.  The guy played a game on his phone and grunted from time to time.  He had heard it all before.

Before we could pass through the metal detector we were inspected by the fashion police.  A matronly looking older woman was checking the clothes of each person wanting to get in.

It was a warm day.  I had on baggy cargo shorts and a button-down short-sleeve shirt.  She waved me through.

She objected to the attire of my other companions.  My wife was wearing a skirt whose hem was just slightly above the knee.  My 18 year old daughter and her friend both had on sun dresses with spaghetti straps and that also came above the knee.  The woman screeched in Italian and pointed to a sign above the gate that described the required dress code.  For women, shoulders must be covered and skirts or pants must cover the knees.  They couldn’t go in.

“You go in and we’ll wait back there,” said my wife.  The girls were disappointed.

My wife and the two girls left to walk all the way back through the line to the starting point.

I passed through the metal detector gate and was being scanned by the security guard when the American college students reached the hemline inspector.  The guy was waved through.  His board shorts were morally appropriate.

Of course the girl was stopped.  The hemline inspector shook her head and made a “tsk, tsk” sound.  She pointed to the back of the line.  The American girl was mad.

“That’s the second day in a row that she wouldn’t let me in!” she said as she stomped away.