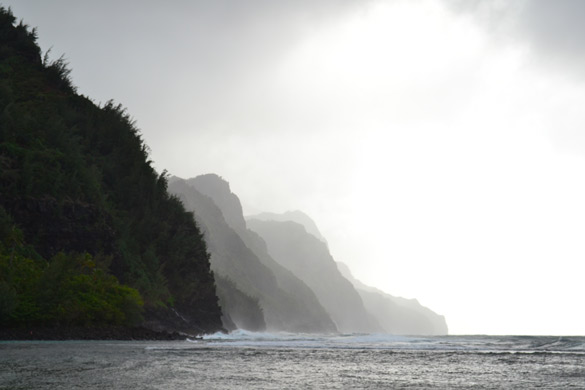 The dark clouds rolled down from the top of the mountains in the interior of the island. The rain pelted the deserted beach. So that’s why it’s so green here. It rains. When on a beach vacation, what is there to do when it rains? Stay indoors and play Parcheesi? Watch reruns of Family Guy or a Star Wars marathon?

“OK, I have an idea.” I said. “Let’s drive up the west coast of the island. That’s supposed to be the hot and dry side of the island, away from the trade winds. I know where there is a beach at the end of the road. Maybe it’s not raining there.”

I have been known to have to get to the top or end of something when traveling. I had to get to the top of the Eiffel Tower, the Empire State Building, the World Trade Center, St. Paul’s Cathedral, Notre Dame. I had to get to the end of the beach on Cayman Brac, the end of the volcanic trail on Maui, a round trip from the Lincoln Memorial to the US Capital and back. I wouldn’t call it an obsession, merely a desire to achieve something, even it if it involves climbing or walking or while on vacation. Why go 90% of the way there without reaching the top or the end? It would be unfinished business I would dwell on when I am old and sitting in a rocking chair at the rest home.

We piled into the Jeep. It had the appearance of a rugged SUV, without having four wheel drive or actually being rugged. We set off from Poipu on the south side of Kauai, Hawaii and wound our way through the small coastal towns. We stopped at the Kauai Coffee Plantation, bought some coffee beans, and stretched our legs.

By lunchtime we were in the tiny town of Hanapepe and the rain had stopped. After quickly surveying the one block stretch of the old town and eating, we got back on the main road. The road that goes to the end of the island.

We had gone there once before years ago when the children were small. I remembered leaving the paved road and driving on red dirt roads for several miles through isolated farmland until even the dirt road ended. After walking through the woods we emerged onto a large beach that stretched as far as the eye could see to the left. To the right in the distance were the Na Pali cliffs. The place was deserted. We had the beach to ourselves.

After playing on the beach for a while I started my trek. I had to get to the end of the beach and touch the rock cliffs at the start of the Na Pali coastline. The place where the Pacific Ocean meets the rock face and you can walk no more. I walked for a half hour and finally touched the cliff. It was a magnificent sight to see the waves crash into the cliff face. I had done it. And I had to do it again.

We got to the end of the paved road to find several cars waiting on the side of the road. We wondered what was going on because it seemed like an odd place to be waiting. There was nothing around but empty fields. We stopped next to the first car and I lowered the window.

“Hey, what’s going on here?” I asked the driver of a small sub-compact rental car.

“We’re not sure we can get through,” said the man, as he motioned to the left.

There was now a red lake where there is normally a red dirt road leading to the beach. The lake was of unknown depth, but sure to have a bottom of extremely squishy red mud. The lake was 50 yards across and reached the fields on either side of the road. The road appeared to be clear beyond the lake. There was a sign at the corner that warned of dangerous flooding in the area and that continuing down the road was prohibited during rains.

“Let’s do it Dad! We can make it through there,” yelled the three risk-seeking young adults crowding the back seat. The voice of reason responded.

“This is the spot on the island where the map clearly states that going beyond this point voids the rental car contract. We’re miles from the nearest town and tow truck. The tow charge would be outrageous. We have five cell phones and no service. It’s after 3pm. If we get stuck it is going to be a very long way to walk. It will get dark. We may have to sleep overnight in the Jeep and eat left over Doritos for breakfast. I will get a backache and then be cranky for the rest of the trip.”

“Oh, come on Dad, where is your sense of adventure?”

Logic and prudence told me to turn around right there and head back to civilization. However, I did want to make it to the end of the road and the end of the beach. What accomplishment was ever truly achieved by turning back early? The scales of risk and reward tipped back in forth in my brain.

“OK, here is what we are going to do. We are going to send out a scout party. Peter, you walk out there and find out how deep it is.”

This is the person who never missed a mud puddle as a child. Peter gladly jumped out of the Jeep and ran over to the lake as a small crowd of bystanders gathered from their rental cars.

He slowly walked out into the lake. He went only a few feet in and lost his flip-flops in the mud. The water rose up to his knees and then back down to his shins before he emerged barefoot on the other side. He then repeated the journey back to the car.

I looked at my wife. She gave me The Look. Not the Look that said what are you thinking, you crazy man, let’s go back to the condo while we still can, but the Look that said let’s go for it, don’t be such a worrier, let’s do something exciting that we’ll talk about to our grandchildren someday in the far off future, and besides, you always have to get to the end.

Trying to preserve my masculinity and without thinking any further I turned the Jeep to head into the lake and punched the peddle to the floor. We hit the lake with a giant splash as the red water flooded over the windshield and front of the car. My passengers screamed like they were in the front car of the rollercoaster at Six Flags. I quickly turned the windshield wipers on in order to see as the tires started to bog down in the mud. The Jeep tossed back and forth as I gave it more gas to keep our forward momentum going. We were crashing through the waves with red mud splattering everywhere when the right rear tire caught some gravel and propelled us down the right edge of the road and out of the lake. We had made it.

Everyone cheered and I looked back to see three young adults making a video of our wild ride on their cell phones. Next stop, YouTube!

The road looked clear ahead as we got underway. We drove on red dirt and gravel for a couple of hundred yards until we got to a bend in the road. Around the bend the conditions changed again. For as far as we could see the road was under water. I had to be the responsible party.

“There is no way we are going to make it all the way through that lake. It is too long. We have to turn around.”

Without debate I made a three point U turn and gunned the Jeep back down the way we had come. We successfully barreled through the lake again back to the main road. The bystanders gawked at the red mud completely covering our vehicle.

I made some progress that day. We had fun and didn’t get stuck, but for once I didn’t make it to the end of the road. It was ok.