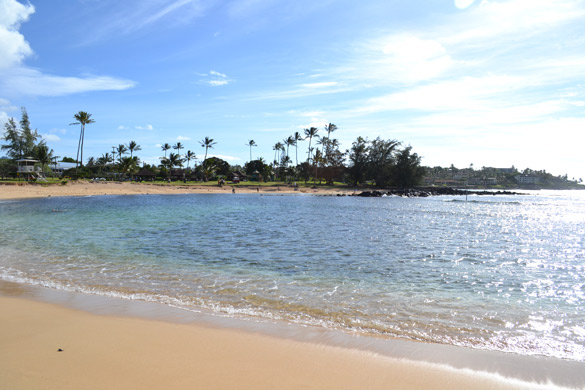 The turtle slowly grazed among the rocks along the shoreline. It was a big sea turtle, with a shell about three feet long. It was mostly submerged. Once in a while it would come up for a breath, look around at the sunburned tourists lying on the beach, and duck back down to continue its late afternoon snack. The beachgoers walked by, oblivious to its presence only three feet offshore in two feet of water.

I had snorkeled in the waters all around the sandbar at Poipu Beach that day, searching for turtles. A guy I talked to in the pool at the condo complex told me that there were typically a dozen turtles in that area. I saw lots of fish while I was snorkeling, but no turtles.

Snorkeling in Kauai is a little different than in the Caribbean. The water visibility is much lower. The water is full of bubbles from the powerful surf and it mixes with the sand and red dirt runoff from the recent storm. In the Caribbean, most fish that one sees are small. The locals have caught and eaten a lot of the larger specimens. However, here in Kauai I saw many larger fish very close to shore.

There were Naso Tangs more than one foot long. I saw several Humuhumunukunukua’ua’a (the Hawaiian state fish and my personal favorite) that were also approximately one foot long. Pairs of Moorish Idols glided along the rocks, pecking away at algae. A very large Unicorn Fish boldly sailed within a few feet of my head. I think he was wondering what I was doing on his surf and turf.

After a long time fighting the surf to get to the outer edges of the reef, I gave up and collapsed in a heap on the beach. It was time to take a nap. The soft strains of Hawaiian ukelele music from a stereo at a local family’s picnic lulled me into sleep.

Later, parked on the beach, I scanned the ocean for any sign of whale activity. Just when my eyes started to get tired, I saw a whale spout. It was almost to the horizon line and at the very edge of my long range vision. After a few seconds I saw a whale rise up out of the ocean and then crash back down.

As the sun was starting its daily descent to the horizon, I wandered the beach where the ocean meets the sand. As I walked, I caught some movement out of the corner of my eye. I turned my head to see the turtle catching a breath five feet away from me. It winked at me, and then dived to rejoin its family.